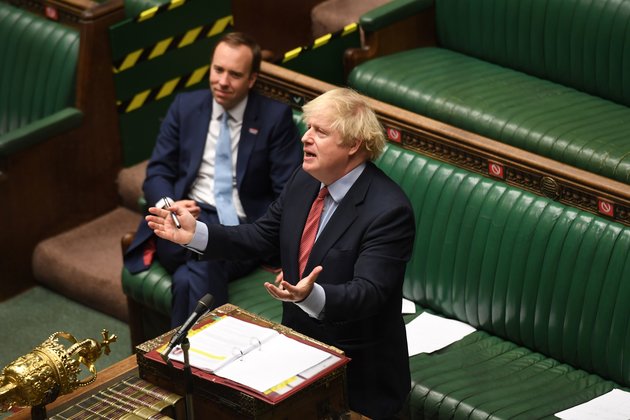 For most of the coronavirus pandemic, the daily Downing Street briefing by ministers of the ruling Conservative party has been accompanied by a chart showing Britain's death toll trailing comfortably behind tallies in other Western countries, notably Italy and Spain. But earlier this month, when Britain's toll surged past continental neighbors, the chart unceremoniously disappeared.

Britain has not had a good coronavirus war, say critics of Prime Minister Boris Johnson, including some Conservatives, who fault him for not locking down the country earlier than he did.

"I've always been skeptical about British exceptionalism," former Conservative lawmaker Matthew Parris commented in Britain's The Times newspaper. "No longer. Our handling of this crisis has been exceptionally poor."

On Monday, an all-party parliamentary panel criticized Johnson's Conservative government for missteps and U-turns, and for failing to be transparent with the public about the scientific reasoning behind its shifting strategy.

Government ministers say they have just been following scientific advice, but until recently, the membership of the main expert body advising ministers was kept secret and the minutes of its deliberations also have been held from publication.

The parliamentary panel rebuked the government for what it termed a "lack of boldness" with the country's virus testing regime and for a failure to boost testing capacity fast enough. "Capacity drove strategy, rather than strategy driving capacity," the committee said.

Committee members also fumed about the explosion of infections and deaths in Britain's nursing homes, which have accounted for about 42 percent of the 40,000 coronavirus-related deaths so far in the country, which is the second highest reported death tally in the world.

Public health officials failed to warn nursing home operators about the rate of infection in the sector during March and April, even though they knew it was rapidly increasing, critics say. And they forced care homes to admit elderly patients from hospitals without testing them first to see if they were infected.

Polls suggest even Britons think many foreign governments, including those in the European Union, have handled the crisis better. The pandemic risks upending Johnson's bid to restore the image of Britain being an orderly, well-governed place after the country's governance took a battering during its long, drawn out and shambolic Brexit process - a fear held even by some Conservative party loyalists.

Government steps to ease the lockdown also are not going well. Public unease is mounting about whether the government is prioritizing the economy above public health. Figures released this week showed that claims for unemployment benefits rose 69 percent between March and April, the fastest month-to-month rise since records began in 1971.

Britain's top finance minister, Rishi Sunak, warned Tuesday that the country was facing a severe recession on a scale "we haven't seen" before and that the economy could be permanently scarred by the lockdown.

He added the country was unlikely to "bounce back" quickly and spelled out the bleak impact on the economy, health and society for prolonging the lockdown. Sunak highlighted research suggesting that for every two percent increase in unemployment, more than a million people develop chronic health conditions.

Even so, the government is facing stiff resistance to its efforts to ease the lockdown. A crucial part of unlocking is reopening schools, but teacher unions have criticized the plans to allow some age groups to resume classes on June 1, dubbing them unsafe. And the government is facing an unprecedented revolt by local governments, including large cities in the north of the country, whose leaders say they will defy government plans to reopen elementary schools.

"We recognize the importance of schools reopening. We also recognize the role of getting children back to school in helping to kick-start the economy. But this needs to be done with the safety of school communities at front and center," said Tamoor Tariq, a local politician in Bury, a town in northwest England. Liverpool, the ninth largest city in England, has also said it won't reopen schools and Manchester, too, the third largest English city, is also opposed.

The leader of the municipal authority in Gateshead in the north east of England, Martin Gannon, which has one of the highest infection rates in the country, says Britain "locked down too late and this un-locking strategy is premature. The testing capacity isn't robust enough, neither is the tracking and tracing system, the R-rate [the virus's reproduction rate] isn't low enough. They're doing this too soon; it means a second wave will happen."

Municipal defiance has now thrown the government's school-reopening plan into disarray with one senior government minister, Robert Buckland, the justice secretary, Wednesday conceding that Downing Street accepts there are still issues needing to be addressed. School resumptions might not be able to happen in a "uniform way," he suggested.

That partial reversal of thought came after one of the government's most senior scientific advisers said schools should only reopen once an effective system to test for the virus, track transmissions and isolate the infected has been established.

Britain isn't alone among Western countries struggling to balance public health needs with economic imperatives. Defenders of the government's efforts say all nations have experienced setbacks and missteps, and have had to shift strategies and tack as new evidence and data has emerged.

World shortages of protective equipment, as well as technical and administrative problems with testing, have affected Britain's near neighbors, too. All countries are trying to feel their way forward as they deal with a novel virus, government supporters say.

"You can only make judgments and decisions based on the information and advice that you have at the time," work and pensions minister Therese Coffey said Tuesday.

"If the science was wrong, advice at the time was wrong, I'm not surprised if people will then think we then made a wrong decision," she added. "Ministers say they have been guided throughout by 'the science.'"

Her remarks have led to accusations that ministers are trying to divert blame for any mistakes on to the government's science advisers. They, in turn, have pushed back. Adrian Smith, the president of the Royal Society, Britain's most prestigious scientific body, chided ministers earlier this week for saying they are just doing what scientists tell them.

He said ministers felt the need to appear decisive but that with a new virus, there is much that is uncertain and that politicians needed to be frank and open about that.

"We're fairly sure about how the planets work, but once you get into new viruses you get extraordinary amounts of uncertainty," he said in a newspaper interview.

Political pressure is now mounting on the government to publish all scientific advice the government is receiving to head off a deepening "blame game" among ministers, officials and scientists. So far, the government has published only 28 of the 120 papers produced by its top expert group.

Johnson, who was hospitalized for COVID-19, has opinion poll ratings that have personally remained high but have dropped in recent weeks. A poll Sunday showed that approval ratings for his government over the handling of the coronavirus crisis have plummeted with a net disapproval rate - the figure reached when the percentage who disapprove is subtracted from percentage who approve - now at minus three percent. In late March it was +42 percent.

Much of the disapproval of the government's performance and of its unlocking plans is coming from the north of the country - in parts of the country Johnson's Conservatives captured from the main opposition Labor Party in last year's general election. That is adding to unease in Conservative ranks.

So, too, is the increasing divergence on coronavirus policy between the government in London and the devolved governments of Scotland and Wales, which have chosen increasingly their own paths and are turning their backs on a speedy unlocking. Senior Scottish lawmakers say the British government's handling of the crisis is "building the case for Scottish independence."

That may be wishful thinking, according to commentators, but the divergence between different parts of Britain is adding to a picture of coronavirus confusion.

Walmart to pay for employees' college tuition, cost of books

BENTONVILLE, Arkansas: Retailer Walmart, the largest private employer in the U.S., has announced it will cover the full cost of ...

NEW YORK, New York - U.S. stocks fell across the board on Friday with Amazon a stand-out for sellers. The ...

Amazon says it will not accept bitcoin for online payments

SEATTLE, Washington: Amazon.com denied media reports on July 26 that the company was considering accepting bitcoins as a form of ...

SANTA CLARA, California: Hoping to regain its lead by 2025 and catch up to rivals, such as Taiwan Semiconductor Manufacturing ...

SYDNEY, NSW, Australia - There was wholesale selling of stocks on Asian markets on Friday with the technology sector coming ...